Summary: The 22 Immutable Laws of Marketing, by Al Ries and Jack Trout (2 of 2) 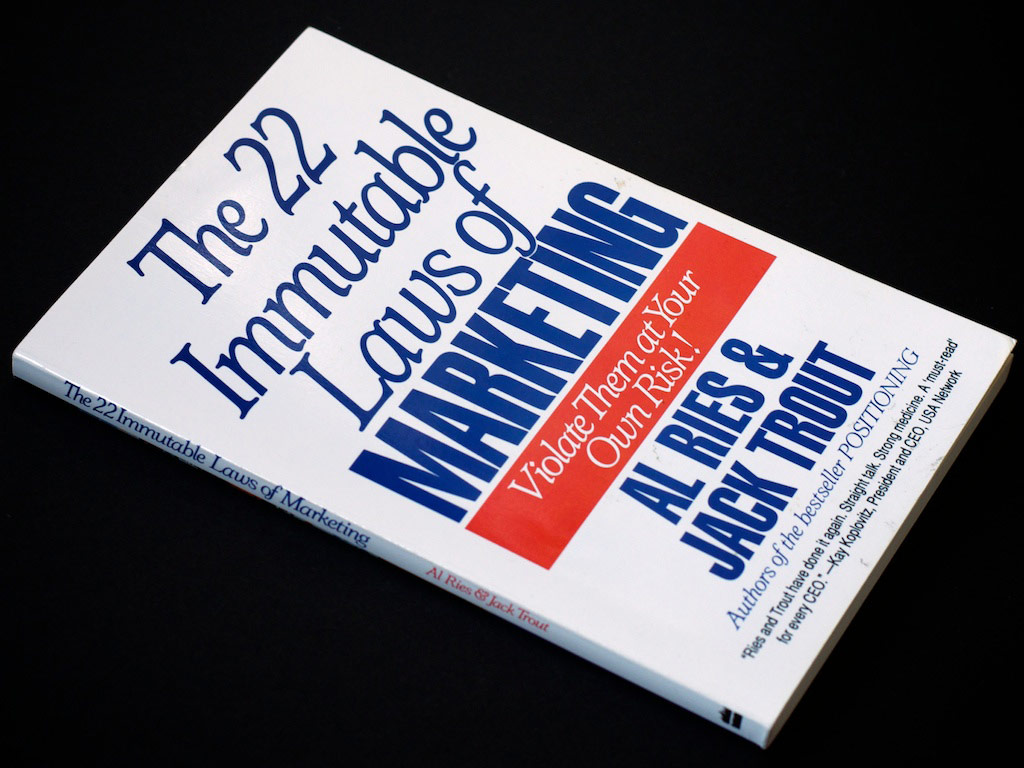 I revisited the book The 22 Immutable Laws of Marketing, by Al Ries and Jack Trout (1994). Below is a brief summary of the second 11 (the first 11 Laws were listed in a previous post).

Law 12 (The Law of Line Extension)

There’s and irresistible pressure to extend the equity of a brand.
One day a company is tightly focused on a single product that is highly profitable. The next day the same company is spread thin over many products and is losing money.
Less is more. If you want to be successful today, you have to narrow the focus in order to build a position in the prospect’s mind.

You have to give up something in order to get something.
There are three things to sacrifice: product line, target market, and constant change.
Less is more. If you want to be successful today, you have to narrow the focus in order to build a position in the prospect’s mind.

Law 14 (The Law of Attributes)

For every attribute, there is an opposite, effective attribute.
You can’t own the same word or position that your competitor owns. You must find your own word to own. You must seek out another attribute.
Too often a company attempts to emulate the leader.
It’s much better to search for an opposite attribute that will allow you to play off against the leader. The key word here is opposite — similar won’t do.

When you admit a negative, the prospect will give you a positive.
First and foremost, candor is very disarming. Every negative statement you make about yourself is instantly accepted as truth. Positive statements, on the other hand, are looked at as dubious at best. Especially in an advertisement.
Next, you have to shift quickly to the positive. The purpose of candor isn’t to apologize. The purpose of candor is to set up a benefit that will convince your prospect.
Ex: “Avis is No. 2 in rent-a-cars.” So why go with them? They must try harder.

Law 16 (The Law of Singularity)

In each situation, only one move will produce substantial results.
History teaches that the only thing that works in marketing is the single, bold stroke.
Finding one is difficult. Finding more than one is usually impossible.
Most often there is only one place where a competitor is vulnerable. Use the focus of their marketing against them.

Law 17 (The Law of Unpredictability)

Unless you write your competitors’ plans, you can’t predict the future.
No one can predict the future with any degree of certainty. Nor should marketing plans try to.
Good short-term planning is coming up with that angle or word that differentiates your product or company. Then you set up a coherent long-term marketing direction that builds a program to maximize that idea or angle. It’s not a long-term plan, it’s a long-term direction.

Success often leads to arrogance, and arrogance to failure.
Brilliant marketers have the ability to think like a prospect thinks. They put themselves in the shoes of their customers. They don’t impose their own view of the world on the situation.
The larger company gives up some of its advantage if it cannot keep itself focused on the marketing battle that takes place in the mind of the customer.

Failure is to be expected and accepted.
Admitting a mistake and not doing anything about it is bad for your career. A better strategy is to recognize failure early and cut your losses.
Be free of an insidious disease called the “personal agenda” that can creep into any corporation.

The situation is often the opposite of the way it appears in the press.
The only revolutions you can predict are the ones that have already started.
Real revolutions don’t arrive at high noon with marching bands and coverage on the 6:00 P.M. news. Real revolutions arrive unannounced in the middle of the night and kind of sneak up on you.

Law 21 (The Law of Acceleration)

Successful programs are not built on fads, they’re built on trends.
A fad is a short-term phenomenon that might be profitable, but a fad doesn’t last long enough to do a company much good. Furthermore, a company often tends to gear up as if a fad were a trend. As a result, the company is often stuck with a lot of staff, expensive manufacturing facilities, and distribution networks.
Don’t overextend. Don’t be all over the place. Don’t wear out your welcome.

The law of leadership is tough for many to swallow. Most people want to believe they got to the top by being better, not by being first.
The law of line extension is the most dangerous law of all to deal with. In this case, you have to be prepared to demolish what management holds to be a basic truth: Big successful brands have an equity that can be exploited to encompass different kinds of products.
Line extension makes eminent sense in the boardroom. You won’t find one director in a dozen who would be willing to challenge management on this critical issue.
So beware! Management will not take kindly to any efforts to curtail their equity expansions. You may just have to wait them out. Management is mutable, but the laws of marketing are not.
Thus are you duly warned. If you violate the immutable laws, you run the risk of failure. If you apply the immutable laws, you run the risk of being bad-mouthed, ignored, or even ostracized.
Have patience. The immutable laws of marketing will help you achieve success.